In August, the Intergovernmental Panel on Climate Change (IPCC), released a new special report. While the report is long and jargon-rich, it is at its core a charge to alter the way people interact with land. Titled Climate Change and Land: an IPCC special report on climate change, desertification, land degradation, sustainable land management, food security, and greenhouse gas fluxes in terrestrial ecosystems, the report involved 107 authors from 52 countries, cited over 7,000 references, and received 28,275 expert and government review comments. Farmers have achieved nearly-miraculous yield gains in the past, yet even more food will be needed to feed a projected 10 billion people by 2050. At the same time, the ways that humans use land contributes massively to climate change, and climate change is making it harder to feed the world.

One thing the report makes clear is that land area is fixed, it is needed for everything, and most of it is already being used. There are roughly 52m square miles of ice-free land, and over 70% of it is already shaped by human activity, as seen below. Further, humans currently use one-quarter to one-third of land’s “primary production” — the conversion of sunlight into chemical energy by plants — to produce food, meat, clothes, and energy. The planet’s 52m square miles cannot all be used to provide for human needs, since land cannot multitask for the most part. Every prairie, forest, and desert; every landfill, city block, and rice paddy needs to fit somewhere on those 52m square miles. 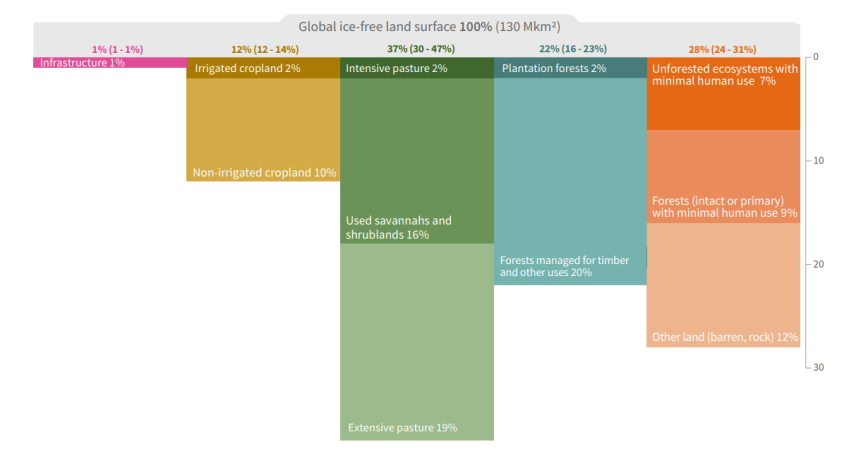 Carbon constantly flows between the earth’s major reservoirs, which include plant biomass, soil, and fossil carbon on land, as well as marine biomass, ocean water, and ocean sediment at sea. All carbon reservoirs are not created equal, however: the length of time something has been absorbing carbon influences how much carbon it contains. This means that fossil fuels formed by hundreds of millions of years of heat and pressure contain more carbon than trees that are hundreds of years old; that domestic animals, which have been eating cereals for a few years, contain more carbon than the cereals themselves, which have been growing for a few months. The energy density of something is related its carbon content, so older carbon reservoirs tend to contain higher concentrations of energy.

Humans affect earth’s natural carbon cycle by burning fossil fuels, which releases carbon stored over millions of years, and by converting forest to agriculture or grazing land, which reduces the land’s ability to store carbon. While the earth is technically able to re-absorb all those carbon emissions, the incredible magnitude and rate of human actions is eroding earth’s ability to keep up. The planet’s land mass currently absorbs more carbon than land use emits, but that is a precious balance. The 70% of land area managed by humans emits close to 5 gigatons of carbon dioxide annually, while the 30% controlled by nature absorbs about 11 gigatons of carbon dioxide annually.

Land’s carbon-storing potential is directly related to natural land area, but the relationship is not linear. Rather, the ability of land to sequester carbon decreases faster than the amount of natural land area. This occurs because temperatures over land increase roughly twice as fast as global average temperatures. Land temperatures have already warmed more than 1.5°C since the industrial revolution compared to the planet’s 0.87°C, and a planet-wide warming of 3°C would result in on-land warming of 6°C. As the biosphere warms, evaporation increases, which in turn causes ecosystems to dry out, and dry landscapes are less efficient at storing carbon. This cycle is already visible — between 1961 and 2013, an additional 1% of the world’s drylands have slipped into drought annually, a pattern exacerbated where levels of state capacity are low.

Land-based greenhouse gas sources produce roughly 23% of all emissions, and are especially challenging to abate. Whereas all greenhouse gas emissions associated with a fossil-fired power plant can be ended by shutting down the plant, using land is crucial to human life and cannot stop. In addition, the way humans use land generates other greenhouse gases besides carbon dioxide, including methane emissions from livestock, and nitrous oxide emissions from synthetic fertilizers. Fortunately, environmental policies can help accelerate change, a range of solutions exist across every food chain (some of which are shown below), and all reductions in greenhouse gas emissions makes a difference. 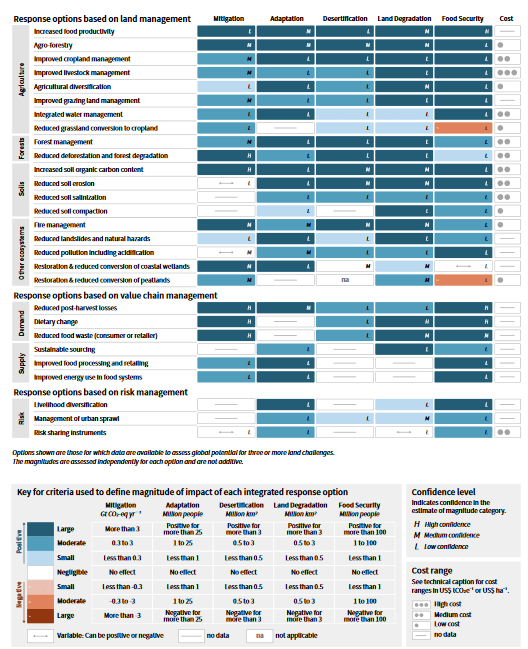 Reducing food waste is one of the cheapest ways to both reduce the amount of land needed to grow crops and feed more people. Consumers throw away roughly 20-30% of food they purchase — one-quarter of all land used to grow crops for human consumption is used to grow food that is never eaten — meanwhile 12% of the world’s population is undernourished. In high-income countries, most food waste occurs “close to the fork,” and could be reduced by donating unmarketable crops, changing food date product dating practices, and reducing food subsidies. Meanwhile, most food waste in low-income countries occurs “close to the farm,” and could be reduced by enhancing access to markets, increasing the amount and quality of post-harvest storage, and improving food handling and storage.

Additionally, as incomes rise in developing countries, residents are projected to consume more meat and dairy. This is a good thing for their well-being, but individuals in high-income countries should reduce their red meat consumption from an average of 3 servings per person per week to 1.5 servings per person per week. Beef converts feed to meat according to a ratio of roughly 25:1, while pork does so at 9:1, and chicken at 3:1. As such, merely switching from consuming beef to other meat sources would be a significant step toward reducing overall land use, and switching to plant-based protein would be an even larger one. 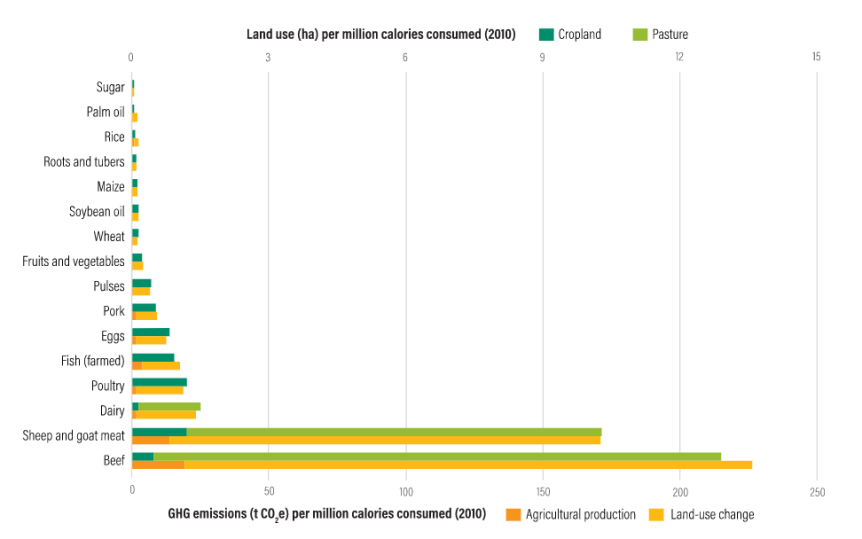 On top of shifting diets, it is crucial to protect what natural ecosystems remain unaltered, and to restore those that can be. This is particularly true of lands with high environmental opportunity costs — replacing an acre of rainforest with grazing land is much worse for carbon storage and biodiversity loss than replacing an acre of grassland with grazing land. Some continued expansion of infrastructure and agricultural land is inevitable, so governments should seek to ensure that expansion happens where environmental opportunity costs are low. Additionally, they should promote the reforestation of abandoned or unproductive crop land, and the restoration of cleared peatlands. Shifting the use of any land should be done using practices that maintain or increase soil carbon.

Since land is scarce, agricultural intensification is crucial to feeding a projected 10 billion people by 2050 while minimizing deforestation. Intensification helps prevent the need for continued deforestation by increasing the productivity of existing agricultural land. Today many of the easiest yield-boosting techniques are already widely used, but there is a high potential for yield gains from improvements in seed breeding, as well as planting cropland more frequently. In addition to crop yields, livestock efficiency needs to be improved. Some techniques for boosting grazing efficiency include shifting grazing area frequently, utilizing legumes to fix nitrogen in the ground, and feeding animals well year-round in locations that experience distinct wet and dry seasons.

Historically, agricultural intensification has been sturdily rooted in the use of fossil fuels. They have contributed to higher and more reliable yields by driving heavy machinery, acting as feedstocks for fertilizers and protective agrochemicals, and energizing the electronics that support precision farming. They have also contributed to the accumulation of greenhouse gases in the atmosphere. Thus, it is crucial to decouple agricultural intensification from fossil fuel consumption going forward. Emissions related to intensification can be reduced by improving manure and fertilizer use, managing rice paddies to minimize methane production, and adopting technologies which are more energy efficient and which electrify processes when possible.

This IPCC special report is notable within the climate change literature for its recognition of land as a scarce resource. However, insofar as this report suggests that there is a lot of work to be done across a lot of sectors in order to prevent serious climate change, it is merely another datapoint. Addressing climate change requires installing more efficient appliances and light bulbs, biking or carpooling when possible, and burning less coal. But it also requires immense changes to the global economy. To put it terms of earth’s carbon cycle: today’s energy system mostly relies on converting energy that was produced in the past, and should be replaced with a system that mostly relies on converting energy produced today.